Sri Lanka received Independence from the British in 1948. From the time Ceylon obtained Independence the Sinhalese who constitute nearly 71 percent of the population have been acting towards the prejudice of the Tamil community. Even though the Sinhalese are majority in the Country the Eelam Tamils are the majority in the Northern and Eastern Provinces, Tamils having more or less inter alia occupied the area covered by the Northern and Eastern Provinces for over 2500 years continuously presently are the majority in the North and East. Over ninety percent of the denizens of the North and East are even today Tamil speaking.

In 1949 the Sinhala majority Central Government of Ceylon disenfranchised over ten lakhs of its Tamil Citizens. These were the Up Country Tamils who had been brought from South India to work in the Tea Estates.

In 1956 the language of the majority, Sinhalese, was made the sole official language throughout the Country overlooking the fact that the North and East had been continuously Tamil speaking from prehistoric times. This was to force the Tamils in Government Service to retire or resign from service.

The Census Reports from the time of the British would point out that Tamils were almost 92 percent of the population in the North and East until 1956. Steady expropriation of the lands in the North and East had been going on from around the time of Independence where the Sinhala majority State brought in Sinhalese from elsewhere to occupy these Eelam Tamils lands, which is a forced Colonization.

Since Tamils started protesting against the anti-Tamil activities of the successive Sinhala majority Governments the Military were sent to the North around 1961. From that time until today the Military is stationed in the North and East except during the civil war when the LTTE were in control.

Acts of Genocides against the Tamils continued even after 1958 in 1961, 1977 and so on until in 1983 many Tamils were chased out from Colombo and suburban areas making almost a million Tamils to flee to foreign Countries.

When the youth took up to arms their struggle was identified as Terrorism and with the help received from many Countries it was brutally crushed in May 2009 by killing over 100 000 Eelam Tamils and over 146000 tamils are unaccounted.

At the end of the war, inter alia Crimes of Genocides, war crimes and crimes against humanity were committed by the Sri Lankan Military Forces. Lots of innocent people handed over to the Forces simply disappeared unaccounted.

The first and so far only Northern Provincial Council of which Canagasabapathy Visuvalingam Vigneswaran current Member of Parliament for Jaffna District in the Sri Lankan Parliament, and former Chief Justice of Sri Lanka and former Chief Minister of Provincial Council, passed unanimously the Resolution on genocide committed by the Sri Lankan State against the Tamils. Genocide continues even now.

In Tamil Eelam, the voices for the right to self-determination are raised loud and clear. On February 4, The protesters called for an international inquiry into the Tamil genocide, justice for the families of the disappeared, the unconditional release of political prisoners, and for the removal of the Prevention of Terrorism Act (PTA). A similar rally was held in Mullivaikkal on the same day to mark Sri Lanka’s ‘Independence Day’ as a “Black Day for the Tamil nation” {1}. On January 30, 2022, thousands of Tamils held a rally in Jaffna calling for a political solution that recognized the Tamil nation, its sovereignty, and it’s right to self-determination {2}. In 2021, the Tamil diaspora also declared common principles of Tamils, which calls for an internationally conducted and monitored referendum and repeal of Sri Lanka’s notorious sixth amendment that prohibits separation and also violates international laws {3}. The common principles of Tamils signed by 6 Tamil non-profit organizations in the United States of America and 7 in Canada so far and the rest of Tamil diaspora organizations are reviewing to sign.

Before the European colonizers breached the sovereignty of Eelam Tamils, there was a Tamil kingdom {4}. When the British left on February 4, 1948, it became a black day for Eelam Tamils as it was the start of the genocide. Upon leaving the Island, the British granted the power to the Sinhala Buddhists to start its atrocities against Tamils. Sri Lanka’s genocide against Tamils escalated with a pogrom in 1958 when hundreds of Tamils were killed by Sinhala thugs and armed forces. During that time, Tamils protested non-violently. Several pogroms and massacres forced the Tamils to democratically mandate to form the independent state of Tamil Eelam. The western media conveniently hid this democratic mandate Defying all odds, the Tamil freedom movement, Liberation Tigers of Tamil Eelam (LTTE), created Tamil Eelam as a defacto-State in 1990.

In 2002, the State entered internationally facilitated peace talks. The Tamil Eelam Government, LTTE, submitted its federal system-based interim solution proposal, ISGA, in 2004. Instead of honoring Tamil’s self-determination, the world powers provided a green signal for genocide. On May 27, 2009, the UNHRC shamefully passed a resolution to congratulate the Government of Sri Lanka for successfully executing genocide. It took a year for the UN to launch an internal investigation to determine that there were war crimes and crimes against humanity leading to potential genocide according to its own 2012 report. UNHRC should expand its mandate to include nations such as Tamil Eelam to be represented in the UN by the non-UN-recognized state people.
In 2018, 21 Tamil diaspora organizations from the world endorsed the resolution {5} after 2 days of an academic conference and a final day presentation at the parliament. “no solution could be found within the unitary state structure of Sri Lanka. Therefore, we call upon Canada and the international community to intervene and enforce international law, to recognize the Tamil people as a nation and to acknowledge their right to self-determination,” the resolution stated.

On January 19, 2022, following a meeting with the United Kingdom of Great Britain and Northern Ireland’s Minister for South Asia, Tariq Ahmad, People Uprising Movement (P2P) has released two letters {6} detailing the ongoing plight of Tamils in Sri Lanka and their demand for self-determination. “We Tamils have been fighting for over seventy years for self-determination. We are a nation of people living in the merged North and East in the island of Ceylon. We have our right to determine our own destiny. Successive Sri Lanka Sinhala — Buddhist Governments have continually suppressed our right to self-determination and govern us employing brutal military force to annihilate, which amounts to Genocide,” the statement read.
Tamil people in Tamil Eelam are continuously fighting for freedom and self-determination in order to protect themselves from Sri Lanka’s genocide. The Tamil diaspora calls the UN and western governments to recognize Tamil self-determination and aid in the process of achieving it.

Recommendations:
We call upon the UNHRC members, other affiliated UN agencies and member of states to adopt, as a matter of utmost urgency, following measures:
• conducting an internationally monitored Referendum that could allow people living in the north-eastern region of the island of Sri Lanka (Northern and Eastern province) prior to 1948 and their descendants to find a democratic, peaceful, permanent, and political solution that could meet Tamils’ aspirations.
• Recognize the genocide resolution passed unanimously in the Northern Provincial Council of Sri Lanka on 10th February in 2015.
• Direct appropriate measures at the International Criminal Court outlining that the affected Tamil Nation have no faith in any domestic commission or inquiry.

To the 4th committee members of General Assembly
• To recognize that Tamil Territories are not Governing by Tamils
• To bring the resolution to the Right to Self-determination of Eelam Tamils through hearing of statements from Tamil elected representatives, petitioners and dispatches visiting missions. 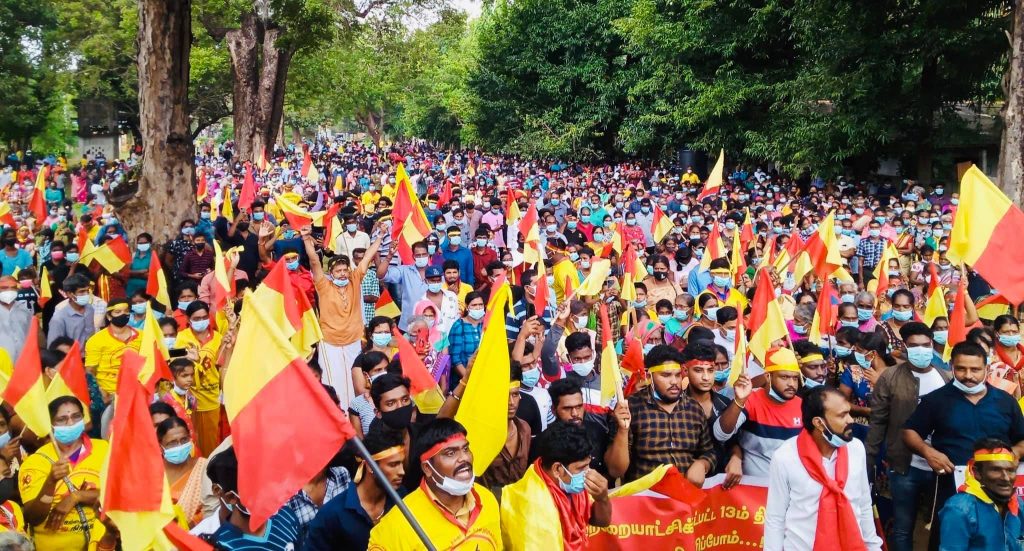